Chritopher Alexander argues that the concept of order, as well as the generation of ordered structures, are fields that can be explained from the point of view of physics and biology, although there is yet too much to be done in the field of architecture. The four volumes of The Nature of Order (The Phenomenon of Life, The Process of Creating Lige, A vision of a Living World and The Luminous Ground) could be considered as a self-biography in which new contributions are linked to those made during the period between the 1960s and 1970s. The numerous examples that illustrate Alexander’s thesis (collected in the book of The Nature of Order) belong both to the world of modern and vernacular architecture and to that of nature, and even to his own work.

On the other hand, we are facing an aescalar and fractal investigation, that addresses both the detail of a mosaic and the structure of a city. Alexander’s gaze rests on nature as a source of evolutionary inspiration and production of order, collected in the second book: The Process of Creating Life. In this second volume, both the morphogenetic processes present in nature and the generation processes of the vernacular architecture are analyzed in parallel. 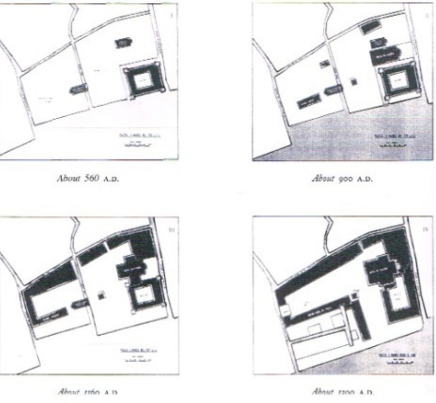 This ambitious work by Christopher Alexander aims to identify and study hidden ordered structures in nature, for its later application, as basic principles without scale, to the built environment.

Although the book was published in 2009, the origin of this publication dates back to the year 1964, from an investigation about “Shorter paths between two points” made by Frei Otto at the Institut für leichte Flächentragwerke in Stuttgart. This work was followed by others about networks and reticles in nature “Wide span two dimensional frameworks; 1970-1985” and “Natural structures“. The research carried out by Frei Otto is of clear interdisciplinary vocation, as a result of collaborations with biologists such as Ulrich Kull and Johann Gerhard Helmcke, as well as being focused on topology, mathematics or self-organized systems.

Otto, as Heinz Von Foerster already did, designs an experimental apparatus with floating magnetized pins that generates a self-organized system through repulsion and attraction.

The book is not presented as a finished investigation but as the germ of different ways to explore. It is a work on occupation processes (settlements, cities, urban planning) and connection processes (communications, infrastructures), but focused both from a morphogenetic and exclusively formal point of view. That is to say, Otto proposes a geometrical investigation on the evolution of the form, but deviating the look towards already existing processes in nature or in those others generated by the technology, like the experimental prototype devised by Otto that measures the relations between the occupation and the distance between objects. Only the last pages of the book are devoted to how these evolutionary patterns can be applied or transferred to urban growth or development.

This look was not new in Frei Otto. A work similar to this one but carried out from a point structural point of view can be found in “Finding Forms. Towards and Architecture of the Minimal” by OTTO, Frei and RASCH, Bodo.The methodology of the research is very clear and systematic, and is carried out from the individual and simple to the collective and complex. Occupation systems are analyzed first on points, lines and surfaces to subsequently evolve into meshes or grids, both static and flexible. The final objective is to provide architects and urban designers self-organized systems for human settlements. 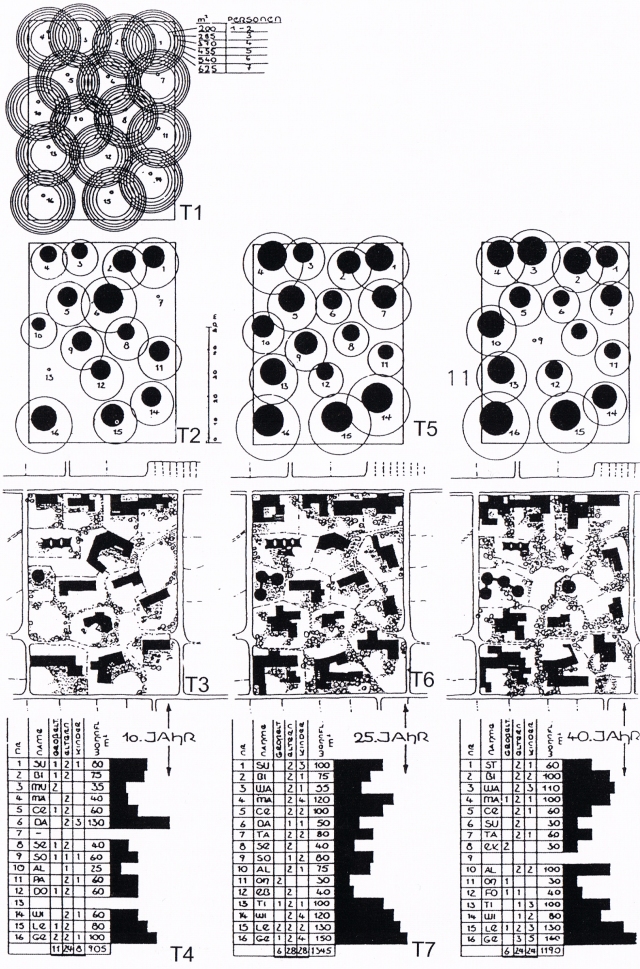 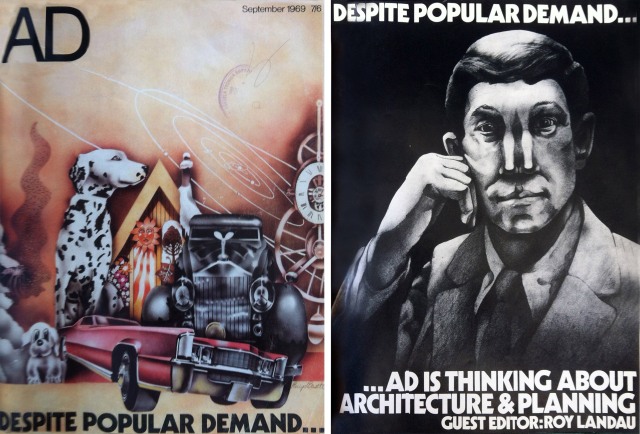 Royston Landau, guest editor of the Architectural Design magazine, proposed in 1969 a revolutionary number about new theoretical contributions that were being developed around architecture and urban planning. This number is a statement of principles on indeterminacy and open systems, due to its interdisciplinary contributions, ranging from the scientific and epistemological approach of Alan E. Musgrave, Imre Lakatos, Warren Brodey, Peter Cowan and Karl Popper, to the cybernetic approach of Gordon Pask, Nicholas Negroponte and Andrew Rabeneck, to the new planning possibilities of Chris Abel and AG Wilson, to the architectural contributions of Cedric Price and Warren Chalk, and to the advances in CAD systems at the hands of Nicholas Negroponte, David Greene and Peter Kamnitzer.

“Thinking about architecture and planning” is a number about theory as a new field of opportunity for architectural research. Landau describes the magazine as a volume about the concept of change in its broadest sense. In fact, he points out that theories which are advancing are in a state of permanent transformation.

The figure of Karl Popper is present directly or indirectly throughout the whole number. In fact, the cover is an interpretation of his famous lecture “Of Clouds and Clocks. An approach to the problem of rationality and freedom of Man”, which is collected inside. The first two articles describe the Popperian contributions to scientific epistemology such as the false objectivity of science (“Objectivity in science” by Alan E. Musgrave) and the methodological falsificationism (“Sophisticated versus naive methodo-logical falsificationism” of Imre Lakatos ).

Information theory and cybernetics is present in several articles as its possible applications to a new teaching methodology based on feedback, complexity and the Unknown (“Unlearning the Obsolescent” by Warren M. Brodey) or about how to approach irreversibility to city analysis (“On irreversibility” by Peter Cowan). This last text advances the importance of information and irreversibility in the government of cities as they are getting more complex, in which the arrow of time has only one direction.

Gordon Pask was responsible for introducing cybernetics into architecture and also probably the first to theoretically expose their relations in the article “The Architectural Relevance of Cybernetics”.

Cedric Price’s relationship with cybernetics begins at the hands of Gordon Pask at the beginning of the sixties. For Price the notion of circularity and feedback represent a great opportunity to activate user participation. But the relationship between Pask and Price was not limited exclusively to architecture but also extended to teaching, based on the theory of learning from second generation cybernetics.

There is no doubt that “Thinking about architecture and planning” is a revolutionary and interdisciplinary number that marks a switch of paradigm about architecture and time. Royston Landau concentrated and compressed, in just one magazine, the different theories about change and evolution, and how these were becoming an area of opportunity for the architect. 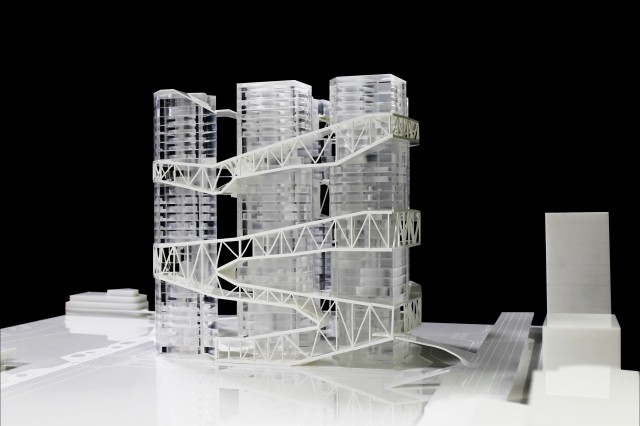 To enhance identity and flexibility to future developers and owners, the system is fractally fragmented according to programmatic scales and clusters. Although the Start-up and Culture complex is a big scale project we do not want to lose the feeling of identity of its users. Each housing unit is part of a small cluster of houses, built with prefabricated CLT (Cross Laminated Timber) structures supported over concrete slabs. These collective housing groups range from two story up to five story floors This means clusters ranging from 20 to 80 homes. In turn, the campus in the sky fragments the five towers of 33 stories in smaller buildings ranging from 4 to 9 floors. Next scale level corresponds to each one of the towers and following level is the whole building. Likewise, the proposal is part of a bigger structure of pedestrian connections from Changdong Station to Seoul Arena. Ultimately our proposal is a multi-scalar system based on identity, knowledge transfer and time evolution.

To allow and enhance interior future transformation, upload and download big products and furniture from start-up companies, an open forklift / lifting platform of 3×7 m. is located in one of the exterior sides of the core. For this reason, offices and apartments are built with prefabricated lightweight wooden structures that could be easily assembled and disassembled. A loading dock is located in level B1 and directly connected to forklift. Loading dock is formed by parking space for medium size trucks, manoeuvre area and storage material area close to lifting platform. For this reason level B1 has a 4,5 m. gauge.

Future transformation is synchronized with building life and activities in order to avoid or minimize as much as possible any conflict. In this regard, new construction work in plots in the sky will be developed without affecting close neighbours. Trucks will park in level B1 close to corresponding tower for unloading materials and construction systems. From storage area all material will be transport to plots in the sky, through the lifting platform. Then, construction work will be executed with prefabricated systems and without requiring any amount of water.

This system for uploading and downloading is suitable not only for construction work but also for moving products, goods and furniture through the whole Start-up and Culture Industry Complex.